Why Can't I Sleep Whenever I Drink Tea? 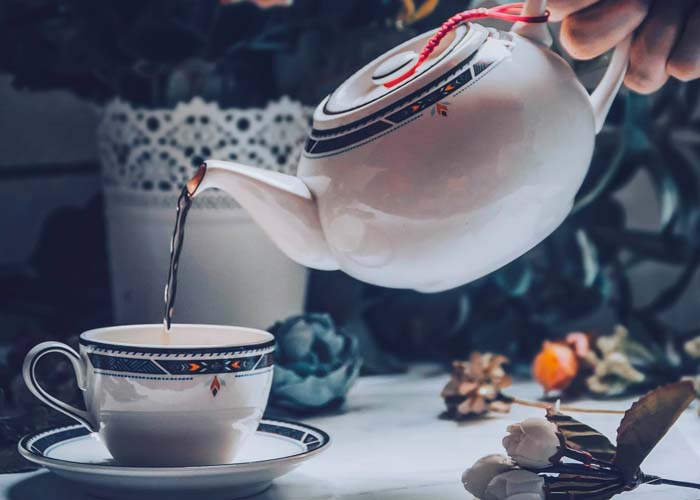 Who doesn't enjoy a cup of tea? There is only one problem: tea leaves contain more caffeine than most cups of coffee. ‍

We struggle to sleep after drinking tea because it contains caffeine which stimulates the central nervous system, making us alert. Caffeine is also a vasodilator, making blood flow around the heart easier and causing palpitations.

The Truth About Tea

There is caffeine in tea, the same substance that keeps us up at night in coffee. A cup of black tea can have more caffeine than two cups of coffee.

The caffeine in a cup of tea from a teapot can be four times greater than a cup of coffee.

Caffeine is a chemical that affects our mood and alertness. Caffeine blocks adenosine receptors within minutes, partly responsible for making us feel drowsy during the day.

Caffeine has a half-life of around 6 hours, and it is going to take a total of twelve hours to get the caffeine totally out of your system.

Can I Drink Too Much Tea?

The answer is an emphatic yes. If you drink too much tea, you may not be able to sleep at night as the caffeine builds up in your body

Is There Any Difference In The Caffeine Found In Tea?

There are some subtle differences, but it’s not to do with caffeine but Polyphenols.

The caffeine in coffee is often described as a jolt of energy or harsh and jittery. In contrast, tea provides a longer sustained release of caffeine instead of receiving a single hit.

When taken in excess, the catechins in tea can be downright dangerous, but when consumed in moderation, they can be beneficial. The reason is the molecular size of catechins makes it more difficult for caffeine to break down.

Because of this, the caffeine found in tea metabolizes slower. This is why tea's energy lasts longer and is not delivered in spikes, and conversely, you do not suffer from the crash that one would experience from coming down from a coffee high.

Tea also has psychoactive properties, and these polyphenols fight diseases but also affect our brains.

Tea is said to be calming while making you alert.

Combinations of catechins, caffeine, and polyphenols have been shown to interact with the brain and influence how you feel.

A 2009 study concluded that tea is related to endocannabinoids and affects receptors the same way cannabinoids do!

Do All Tea Varieties Contain Caffeine?

The majority of tea varieties from white tea, green tea, earl grey all contain caffeine. Dark teas contain the most caffeine, with earl grey being in the mix as a higher caffeine tea.

What Can I Do To Sleep After Drinking Tea?

Well, now you know that tea contains as much or even more caffeine than coffee. It is a case of planning when you are going to drink your favorite beverage.

Because tea releases caffeine in a sustained way over a more extended period, the coming down effects of the caffeine are less pronounced. Which in many ways stops the craving for another hit of caffeine to keep the buzz going.

Given that caffeine has a half-life of around 6 hours, it will take a total twelve hours to get the caffeine totally out of your system.

Try not to drink tea after lunch, switching your mid-afternoon beverage to water or a herbal tea such as chamomile tea free from caffeine.

Go for a walk but don’t overexert yourself. Walk at a pace where you can still have a conversation, but you are breathing heavier than usual.

Who doesn’t love to relax in a warm bath with your number 1 soap choice for bubbles? Warm baths are relaxing, so take your time. The whole idea is to make you feel relaxed.

The bedroom temperature is an essential factor when you are trying to sleep. If the room is hot, you become restless and overheat.

Essential oils are the perfect way to relax, and lavender oil is renowned for its therapeutic sleep effects and shouldn’t be overlooked as an excellent tool to get you to sleep quickly.

Place the essential oils onto cotton balls and place them around the bedroom for maximum effect.

Don’t be tempted to use an essential oil heater such as a candle, which is a fire hazard. The idea is to relax and not worry.

We all know that reading in bed makes our eyes feel heavy and is conducive to sleep. Choose a book that has a relaxing tale to tell. Don’t read horror stories, so you need to hide on the duvet.

The use of calming music in the bedroom is very relaxing. There are some great soundtracks online, like the gentle sound of lapping waves along the shoreline.

Or rain hitting the windows, these rhythmic sounds make us forget the day's worries and drift off into a deep sleep.

Is Caffeine In Tea Safe?

Yes, it’s safe. Throughout history, tea has been consumed as a drink, and it is associated with longevity in China. Tea is not only refreshing but also calming, as we discussed earlier.

The benefits of tea outweigh any negative aspects of the drink. Like most things in life, it is all about moderation: drink tea knowing it will keep you awake or cut back and drink less tea in the afternoon.

Tea can indeed keep you from sleeping, so consider reducing your tea intake throughout the day. Maybe your last cup should be at lunchtime to allow your body to expel the caffeine.

The caffeine in tea is not distributed through your body in the same way as in coffee, but the effects can be the same.

Tea is a great morning beverage, as it will keep you calm and alert at the same time.